June is LGBT Pride Month. We see people donning the rainbow-colored theme to show their support to the LGBT community and acknowledge the impact they made in the world.

This event started in the United States (US) in commemoration to the Stonewall Riots – a demonstration of the gay community in response to the police raid at the Stonewall Inn in New York – which was one of the key events in advancing the gay liberation movement in the US. Since then, various US Presidents declared June as LGBT Pride Month and the practice of this event has spread across the globe – thus also making its way to the Philippines.

With this in mind, I am writing a two-part article which will explore the status of LGBT Rights in the Philippines. I will tackle policy in the first part and advocacy in the second. In doing so, I hope to shed light on the importance of celebrating this event.

Now, in this first article, I will delve specifically on the Philippine government’s action towards LGBT rights. Let’s explore the public policies in place and determine whether or not we have achieved equal rights.

The 1987 Philippine Constitution indicates that the State values the dignity of every person and guarantees full respect of human rights. This is further put into action through the legislation of The Republic Act 9710 or the Magna Carta for Women whose provisions emphasize that all individuals as equal human beings.

In this regard, it is logical that members of the LGBT should be enjoying the same rights as anyone. They should be entitled to their economic, social, cultural, political, and civic rights. However, this may not be the case in the Philippine setting.

As of 2021, the Philippines has not legislated a national law that protects the LGBT community from discrimination. Their rights are only partially upheld by a few public policies that provides discrimination protection on the general population. In addition, few cities, municipalities, barangays, and provinces adopted an ordinance that upholds LGBT rights. Also, a handful of schools are considered as LGBT-friendly or pro-LGBT.

In terms of protection against discrimination, the LGBT community is only through a few policies such as the Civil Service Commission Revised Policies on Merit and Promotion which prohibits the discrimination in the selection of employees based on gender – among other criteria. In addition, through their Memorandum Circular No. 29-2010, discrimination against LGBT in applying for civil service examination is forbidden.

In 2012, the ban on gays in the military has ended and Philippine Military Academy – the premiere military school of the country – open their doors to gay and lesbian individuals. Therefore, giving gays and lesbians the chance to serve as part of the Philippine military force.

The lack of a national discrimination policy led for other regions to adopt their own local policy to ensure that the rights and welfare of the LGBT community are protected. Provinces, cities, municipalities, and barangays has legislated and adopted their own versions of policies to fight against gender- and sexual orientation-based discrimination (full list of areas/regions are provided below).

The Republic Act 10627 or the Anti-Bullying Act of 2013 protects the welfare of LGBT individuals in the school setting by identifying gender-based bullying as a legitimate bullying offense indicated in its implementing rules and regulation. It is also observable that there are school-based organizations that aim to promote and protect the welfare of the LGBT community in their campuses.

Despite the presence of policies that can protect the welfare of LGBT community, the Philippines are yet to have a policy that would allow for gays and lesbians to legally engage in same-sex marriage. Through the years, several attempts were made to legislate a policy, none has come to fruition.

Moreover, it doesn’t help that the Executive Order No. 209 s. 1987 (also known as the Family Code of the Philippines) explicitly indicates that one of the essential requisites to make a marriage valid is if it is between a male and a female. Therefore, unless the policy is amended, same-sex marriage is still impossible in the Philippines.

In addition, the Philippines is yet to legislate a policy that allows for same-sex civil union. Its advancement is crucial because marriages and civil unions in the Philippines have similar legal benefits – it is just that marriage has this religious connotation. As such, passing a law that allows for the civil union of same-sex couples will be a significant step in truly recognizing the rights of the LGBT community.

So, do we have equal rights?

First, it is important that we acknowledge the fact that the 1987 Philippine Constitution values dignity and respects the human rights of each individual. In addition, the Magna Carta for Women reiterates that each individual is equal.

Several policies are in place that protects LGBT individuals against discrimination in the workplace – a problem that the community faced for year. These policies upheld their rights to be employed – public and private sectors. In schools, the Anti-Bullying Act of 2013 also prohibits gender-based bullying.

Despite being a country that is predominantly Catholic (one of the religions critical against the concept of gender and sexuality), there are some good signs that show that the country is gradually accepting LGBT. Various provinces, cities, municipalities, and barangays have adopted their own ordinances to uphold the rights of the LGBT community.

On paper, that looks decent for the community.

However, it is important to note that there is no national law in place that truly protects and promotes the rights of LGBT in the Philippines. This is a critical issue as ordinances are only applicable to the localities in which the policy is legislated. Therefore, upon engaging in various activities outside these localities, the rights of the LGBT people are still vulnerable.

Moreover, even though the constitution values the human rights of each individual, it is notable that LGBT individuals cannot partake in a same-sex marriage. This is an important issue to tackle because this problem is not just a matter of not having a policy enacted that allows them to engage in marriage. Rather, the Family Code of the Philippines has provisions that prohibits people of the similar sex to be married.

In addition, the Philippines is yet to pass a legislation that would allow same-sex couples to engage in a civil union. As such, LGBT people cannot access a vast range of legal benefits that couples may receive from this – benefits that touch on health, employment, retirement, and insurance among others. Thus, their rights are limited.

So, again, do we have equal rights?

To put it simply, we are yet to achieve equal rights in the Philippines.

Some policies are in place to protect them, but those are not enough. In general, outside the regions and areas that legislated policies which protect them, their rights are still vulnerable. Moreover, despite the explicit declarations and reiteration that human rights are being respected and valued (and that all of us are equal), the LGBT community are still not allowed to engage in marriage or civil unions.

As such, there is still a need to have concrete policies that will not just protect their rights, but also promote them. LGBT people are no different to other citizens. They do perform their duties as good citizens of the country. Therefore, it is just right that we amend policies that limit their rights and enact policies to promote their welfare.

How about you? What do you think about the Philippine policies on LGBT Rights? Are they enough? What more policies should we enact to protect and promote the welfare of the LGBT community?

Also, stay tuned as the next article will tackle the advocacy on Philippine LGBT rights.

Together, let’s fight with pride. 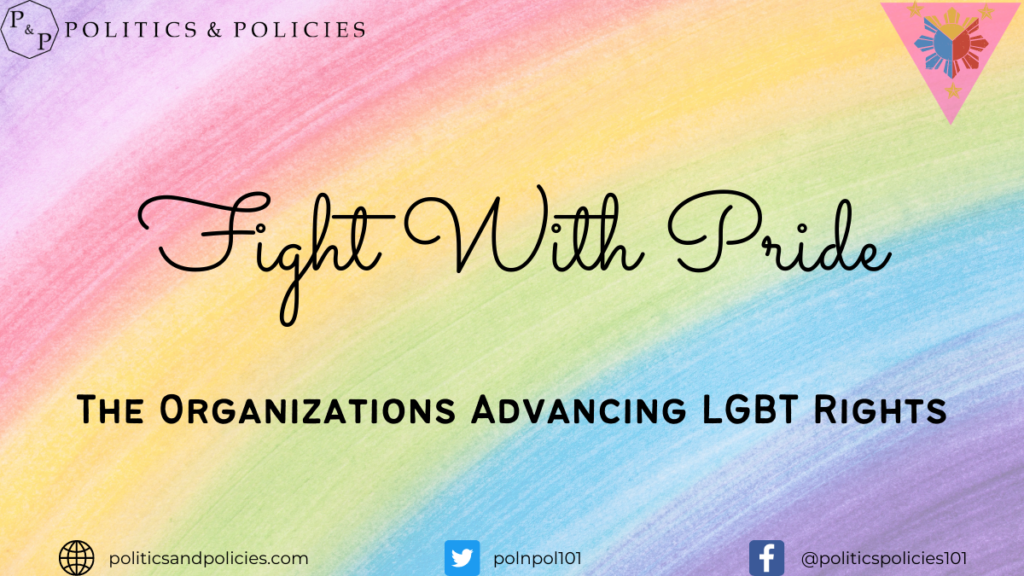