In the previous article, we learned that there is a big gap in terms of public policies that protect and promote the rights of the LGBT community in the Philippines. There is no national law that protects them from discrimination and they cannot engage in marriages or civil unions. Therefore, their welfare is vulnerable and their engagements are limited compared to the non-LGBT individuals.

To address these lapses, various organizations stepped up to bridge the gap left by the government in protecting and promoting LGBT rights. These organizations provide a wide range of services that cater to the welfare of these individuals; while also performing the necessary tasks to ensure that policy proposals in favor of the LGBT community will get legislated.

Here are some of the organizations and entities that fights with pride for LGBT rights:

Established in 1992, UP Babaylan is the longest-existing duly recognized LGBTQI student organization in the Philippines and in Asia based in University of the Philippines – Diliman. This campus-based organization is anchored on the belief that all persons should be equal regardless of race, nationality, religion, sex, and sexual orientation.

UP Babaylan is involved in various campaigns that advance and protect the rights of the LGBT communities. Most notably, they engage in the annual celebration of Pride March and lobbying for the SOGIE Equality Bill.

To further achieve their goal, UP Babaylan undertakes activities such as support services for the LGBT community within the university, conduct conferences and symposia on lesbian and gay issues, hold workshops on gender sensitivity, and network with national and international lesbian and gay organizations.

Babaylanes, Inc. is the alumni organization of the trailblazing, pioneering student LGBT organization, UP Babaylan. Established in 2007, Babaylanes, Inc. seeks to expand and continue the advocacy work towards promoting and protecting the rights of LGBT community outside the University of the Philippines campus.

It was founded to empower the LGBT community through awareness raising, community building, consolidation of LGBT communities, campaigning, advocating, and mainstreaming of LGBT concerns, and supporting the initiatives of UP Babaylan.

Metro Manila Pride is a volunteer-managed, non-partisan, not-for-profit organization dedicated to educating, equipping and empowering the Filipino LGBTQIA+ community to work towards a future that recognizes and respects the rights of persons to a dignified life without discrimination and prejudice.

The Metro Manila Pride organizes the pride marches conducted annually in accordance with the celebration of Pride Month across the globe. In addition, the organization also conducts human rights education and research that creates platforms, spaces, and materials that render human rights education accessible to everyone. They also empower LGBT artists by promoting their literary works, visual arts, films, music, and performances.

Rainbow Rights Philippines (RRights) is a non-governmental, non-profit, non-partisan organization focused on legal literacy and empowerment with respect to SOGIE and gender based laws and policies.

RRights work with various government agencies and non-government organizations to ultimately achieve their goal of eliminating discrimination of any form and advance LGBT rights through the legislation of appropriate policies.

TLF Share is a non-profit, non-governmental organization of peer educators, trainers, and advocates working on the sexual health, human rights, and empowerment of gay men, bisexuals, other men who have sex with men, and transgenders.

Specifically, TLF Share promotes sexual health among community organizations of LGBT through community-led, participatory, and human-rights based education and advocacy. Furthermore, the organization addresses SOGIE-based stigma and discrimination through advocacy.

GALANG started out as a small group of lesbian friends who were either keenly observing or actively engaged in the lesbian, gay, bisexual, and transgender (LGBT) activist communities in the Philippines. The organization’s main thrust is to educate on the relationship of poverty and sexuality to gain ground in advocating to and for the rights of sexual minorities.

To attain their objectives, GALANG conducts a variety of activities that aims to promote and protect the rights of the LGBT community. In particular, the organization provides capacity building activities that aims to empower the LGBT, build networks and alliances that would allow for a stronger push for policy legislation that caters to LGBT, and conduct research ventures to further understand the needs of the community and gain timely knowledge of the current concerns of LGBT.

LakanBini Advocates Philippines is a community of transgender advocates that serves as a voice for trans-led advocacy on equality and access to health and well-being and human rights services.

Mujer-LGBT Organization Inc., based in Zamboanga City, envisions creating a community where the presence of lesbians, gays, bisexuals and transgenders is celebrated and accepted. A society where preference is accepted without prejudice and everyone is empowered to be of service to all.

Initially, on its establishment in 2015, the organization was focused on fighting the stigma on HIV and AIDS. They further expanded their coverage and addressed human rights concerns and thus included LGBT rights in its advocacy. The organization conducts educational discussions to raise awareness on LGBT concerns and provides free psychosocial services to distressed LGBT.

Open Table MCC is an ecumenical Christian church that has a specific outreach to lesbian, gay, bisexual, and transgender (LGBT) families and communities. They are a progressive Church that welcomes & celebrates all people in their full humanity; embracing people’s lives & gifts, including LGBTQI+ & PLHIVs.

Action for Health Initiatives (ACHIEVE), Inc. is a non-government organization that works on human rights, gender and other health and development issues.

Primarily, ACHIEVE caters to migrant workers, people living with and affected by HIV. In time, the organization expanded its reach and also actively participated in advancing gender-related advocacies and eventually catered to people affected by TB.

PANTAY is a diverse coalition composed of youth organizations from all over the country united in our struggle for equality, dignity, and respect for all Filipinos regardless of sexual orientation and gender identity and expression.

In achieving its goals, PANTAY actively participates in lobbying for legislation of policies that would protect and promote the rights of LGBT community. To become effective policy advocates, PANTAY builds its networks and relationships with progressive groups and organizations. They also conduct educational initiatives to address misconceptions, empower citizens, and aid LGBT individuals to organize.

Despite the absence of concrete and robust public policies on the protection and promotion of LGBT rights, it is notable that non-government organizations across various sectors have stepped up to bridge the gap unaddressed by the government. These organizations provided comprehensive services that not just defends the welfare of the LGBT community, but also caters to their specific needs.

Drawing from the non-exhaustive list of organizations, majority of them conduct education and research work, capacity building workshops, and lobbying activities. They target not just the empowerment of the LGBT communities but also the enlightenment of the non-LGBT individuals. Accordingly, these organizations also provide services to address wide-range of concerns (such as legal and health) that LGBT individuals encounter.

It is a blissful thought to see organizations stepping up to uplift the lives of vulnerable sectors such as the LGBT community. We can never thank them enough for the services they have done to bridge the gap on LGBT rights that the government is yet to address.

However, we should also note that we should not be content with this arrangement. Legislation of appropriate public policies that promotes and protects the rights of LGBT community should be advanced. The LGBT community have the rights to have these kinds of policies legislated as they are also taxpayers that contribute the annual revenue of the government.

Also, and most importantly, the LGBT community are equal human beings as non-LGBTs, therefore their rights should be recognized, protected, and promoted by the Philippine government – and we’ll only achieve that by legislating and properly implementing the appropriate policies catering to the LGBT community. 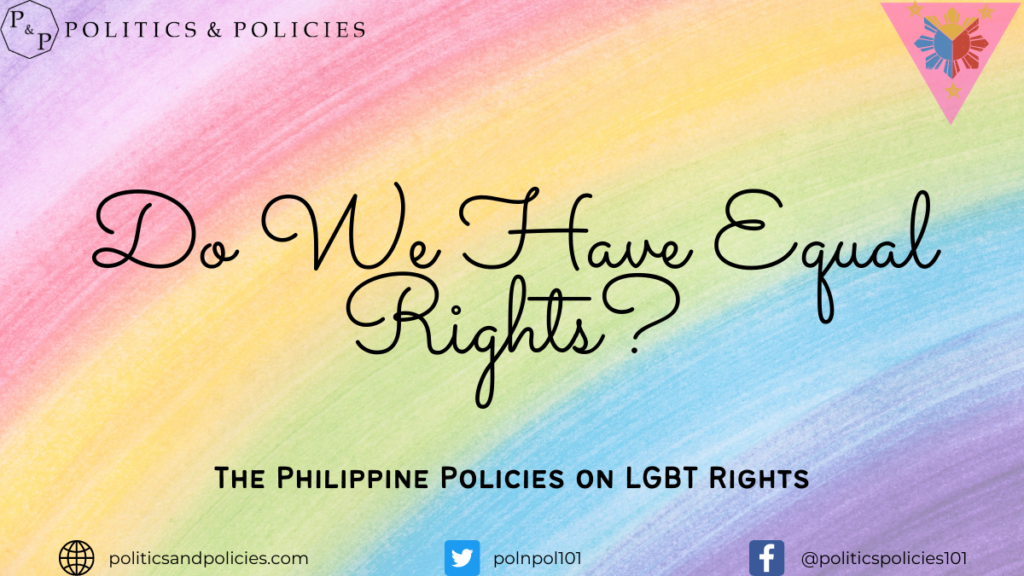